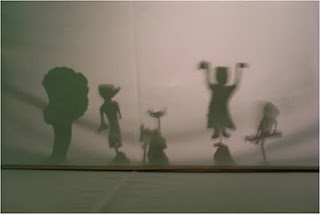 I attended Claire’s Shadow Puppet Theatre session at the Istek conference with a bunch of misgivings. The Shadow Puppet idea was very appealing but the preparation and the amount of work involved, I thought, would be the biggest problem. I was wrong.
Over to Claire, who at my request, decided to share her brilliant ideas with you.
Materials required:
·       Cardboard
·       Scissors
·       Pencils
·       Sellotape
·       Thin wooden sticks
·       Light source, e.g. torches, lamps (NB: In rooms with plenty of natural light position the screen in front of the window as the sun can be used)
·       Material for the screen, e.g. thin white table cloth, white tissue paper.
·       Envelopes including job descriptions
·       Target language to be included in dialogues.
Shadow Puppet Theatre is an engaging activity that uses simple techniques to make the process of learning about new characters more enjoyable and rewarding. This hands on approach allows learners to develop their speaking and writing skills, as well as giving an opportunity to use real language in a positive student centred environment. It is suitable for use with primary students but can also be adapted to suit higher levels. Shadow puppet theatre can be used to introduce characters from readers and main course books or to support general language learning in the classroom.

The basis of this technique is very simple. Students should be in groups of 4-6 students for the duration of the project. Groups could be friendship based, teacher chosen or randomly chosen. A useful way to organize groups is to give each child a colour and then ask all the reds to group, all the blues.. etc. Once the groups are formed, students should be provided with a number of characters, ideally projected onto a whiteboard. These characters could be from material used in class or totally fictional. As a starter activity, learners should describe two characters in a set time and note down their groups ideas on a post-it. During feedback students can stick their post-its next to the characters on the board so that the teacher can share and elicit sentences from the material provided.

After feeding back to the class, the outline of the task should be shared with the group. The teacher should reveal that groups choose at least two characters and create a short shadow puppet sketch. A good way to organize this is to hand out envelopes containing a matching activity of job descriptions and roles to the groups. The learners then complete the activity before the teacher shares the answers on the board. Students can then be asked to choose a role. To ensure success, these roles should be clear and a realistic time frame should be given. The jobs should include:
•       Script writers- write the story and narrate during the performance.
•       Puppet makers- make the puppets and read the dialogue during the performance.

A group size of 4 is ideal for this activity as 2 students can be assigned to each job, so the learners feel supported by working in pairs. Larger groups can be given more characters to work with and the extra students can help by holding the screens or being responsible for the light source during the show. Groups are then assigned a target language to include in the production as a focus point. The target language should be used occasionally within the dialogue to make communication more natural. Using the target language exclusively could lead to unrealistic dialogues with limited meaning.

The script writers should write a short dialogue including the target language for the performance. It is important to remind learners to include some background information before the dialogue begins, e.g. One day Homer and Bart were in the kitchen…
The puppet makers should draw and cut out the characters on the cardboard provided- cutting holes for eyes and other features creates a great effect. They can then stick the character to a pencil or wooden stick to complete the puppet. It is a good idea to give time to experiment for both script writers and puppet makers- creating an opportunity for peer assessment within the group before the performance.

The final product can be presented either in front of the whole class or between two groups. Before the performance it is a good idea to explain where students are expected to sit or stand during each show. This will allow a smooth transition between groups. During the performances there is an opportunity for peer (audience) assessment and students should complete feedback forms accordingly. The criteria used could be discussed and agreed on with the class, or created by the teacher and shared before the performance. Alongside assessment for learning, filming is a valuable tool to be used with learners. In fact, it has a double effect, firstly learners really strive to achieve their best (and often ask for two takes!) and secondly, it gives a chance to revisit the material in the future for further analysis in the class.

When using new activities it is important to know how the strategy will benefit learners and how much time should be devoted to the process in its entirety. This technique can be extended or reduced to suit the needs of a variety of language learners and language teachers. When time is restricted it can be completed in as few as three lessons, one for set up, the second for dialogue writing and puppet making and the final for the performances. However, students can get a great deal from the sessions and a longer time period would be preferable to allow for trial and error during the developmental stages. Shadow puppet theatre can be used as an example of CLIL in the language classroom and as such be extended to include a number of subject areas, e.g.
•       Learners could research ideal screen materials in Science, learning keywords such as transparent, translucent and opaque. They could also investigate light sources alongside screen materials to produce the optimum environment for their puppets to be show cased.
•       In Design Technology, students could use the design process to make screens
•       In History traditional puppet shows could be explored- this would be of particular interest in countries such as Turkey as shadow puppet theatre was used for entertainment in the past.
•       Voice projection and intonation could be explored in the Drama class.
•       Scenes could be created in the Art class.

In fact planning time with other subject areas would be a fantastic way of incorporating a real cross curricular approach.

In conclusion, this technique is a flexible activity that can be altered to suit a variety of situations. It engages learners and allows freedom of thought in the EFL classroom. The roles and time restrictions given support learners by keeping them focused allowing the language teacher time to advise students as and when required. Therefore the teacher is facilitating the learning process while students take ownership of their projects, improving their self esteem as they strive to achieve their potential.

Claire Bingham, currently working at Özel Bodrum Marmara Koleji as a teacher of English, has taught in the United Kingdom for a number of years and recently relocated to the warmer Turkish climate. Her personal interests include cross curricular activities and task based learning. She has a background of experience in the teaching of English Language, Science and Physical Education.
Thank you Claire!
Posted by little_miss_bossy at 2:22 PM