It was a dark and stormy night - story writing 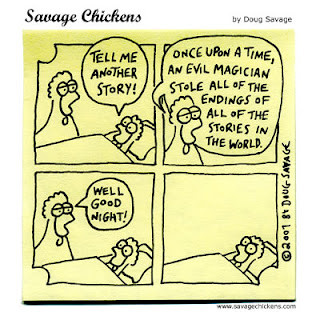 A few years ago I stumbled upon a wonderful activity to practise story writing - it was called ‘It was a dark and stormy night’. The main idea behind it was to have students sit in a circle and after dictating the first sentence (‘It was a dark and stormy night’) engage them in collaborative one student-one sentence type of writing.
I’ve used this activity many times and students loved it. The only problem was that I was gradually getting bored with it and felt the need to adjust and improve it. What is more, the students’ stories sometimes lacked a proper structure and were often senseless or monotonous.
So here’s how I’ve decided to make the activity more fun!
Before writing:
Ask students for examples of traditional stories/ tales. Try to elicit stories such as Cinderella, Little Red Riding Hood, Three Little Pigs etc.
Elicit typical features of a well written sorry:
Copy an example of a short story from any coursebook (FCE coursebooks should have some good examples), cut into pieces and let students unscramble it.
Analyze it and make students notice all the features you have discussed before.
Tell your students that they are going to write a story. Get ready for moaning and groaning!
Make them sit in a circle, each student with an A4 sized piece of paper.
Tell them to choose a name of the main character of their story and draw a small photo-sized picture of him/her on the top left hand corner. Next to it, the students can write: three adjectives describing that person, what she/he likes, who she/he lives with, their relationship status etc.
Dictate the following sentences:
It was a dark and stormy night and ________ (students write the name of their character) was in/on/at ________ (students write a place name e.g a church, a beach, the street).
S/he was feeling really ________ (students write an adjective). S/he really wanted to ________ (students write a verb e.g. to drink water, to pee, to call his mom).
Suddenly a phone rang. It was ________ (students write a name of a person e.g. Santa, the Queen of England, her sister).
Ask students what they have just written and elicit that it is an introduction.
Now tell them to pass the paper to the person on their right and continue with the story.
I guess that in the original version every student was supposed to write one sentence and pass the paper. As I have said before I have decided to improve it.
Imagine you have 10 students in class.
Student 1 begins the story.
Student 2 adds 1 sentence.
Student 3 adds an element of romance.
Student 4 adds 2 sentences.
Student 5 adds an element of crime.
Student 6 adds 1 sentence.
Student 7 introduces a new character.
Student 8 adds 2 sentences.
Student 9 adds an element of mystery.
Student 10 ends the story.
Obviously, all of the above suggestion can be altered and modified. You might want to add a fun/surprise element, introduce new places or change the order of what I have come up with.
Some students always finish their task earlier than others, so I have stuck to a slow countdown after a minute or two to make them all finish on time and pass the paper at the same time. Just say something like ’10-9…1. Time’s up. Pass the paper. Now add a new character.’
An alternative idea involves bringing a bag of different objects e.g. a postcard, a spoon, a scarf etc. to the classroom. Before writing, each student draws an object and later includes it in the story.
As a follow up, collect all the papers, number them and stick on the walls of the classroom.
Tell the students to walk around, read the stories and choose one they like best.
Have secret voting for the best story and read it aloud.
Ask students why they chose it and check whether it has features of a well-written story that you have discussed before.
Coming up next – samples of my students’ writing!
Do you have any interesting ideas for story writing? Would love to hear some!
Posted by little_miss_bossy at 10:57 AM 3 comments: