How I Learned Your Language – Spanish by Mike Harrison

A potted history of my language learning life – like many, I started learning languages at secondary school. The first was German, followed a year later by French. I had ditched German and I added Spanish when I started university. Each of those languages has been my favourite at a particular time, and in fact, each became my favourite in turn (German, French, then Spanish) – I really am fickle with my languages. I studied German for a total of 7 years, and have studied French for 14 and Spanish for 10 (though my formal education for those two finished in 2006).

Anyway, on to the main part of my post. There have been things in common with all of my language learning experiences (location, teaching styles, learning environments) but I think I have had by far the most success with Spanish, and I want to find out why, in particular why I succeeded more than with either French or German. Come on a journey with me.

First steps in language learning  – German and French 1995-2002
I learned both German and French at school. My teachers were not native speakers, but British. There were the usual activities – grammar gap-fills, listening/reading comprehension, role plays, dictation, spelling – all quite normal, and we did work from text books. Despite not being native speakers, both my German and French teachers spoke a lot in the language they were teaching, right from the start. I thrived in that environment and got As for both languages in my GCSEs (exams you do in the UK aged 16). But after that I started to get confused between French and German and also between the different cases in German (possibly the most difficult thing I have ever studied). I fell out of love with German and eventually dropped it aged 17. I continued with French and went on to study it at university.
The absolute best thing about studying both languages at school was the chance to go on exchange trips (twice to Aachen in Germany and once on a work experience trip to Nantes in France).

Next steps in language learning – French and Spanish 2002-2006
When applying to go to uni, I didn’t really know what I wanted to do, and ended u applying for languages because I was good at them (despite the break up with German). However, I did know that didn’t want to do just French. I toyed with French and War Studies (don’t know where that came from); French and Italian; French, Italian and Spanish at Bangor, and what I ended up doing – French and Spanish.
I really enjoyed the shift in how I studied at university. The onus is more on the student than at school. You have to put in the work in your own time or you won’t improve. I found studying a new language stimulating. All the while surrounded by highly educated people teaching about matters related to the language (literature, film, geography, history...) and native speakers (part of the key to REAL progress here) for conversation and grammar classes.
The best bit was being able to live in Spain for a year, which I did working as a language assistant. I had a room in a flat just down the road from the beach,  and not 10 minutes walk from the school I worked at.

Learning on my own – Spanish 2006 onwards
I don’t think I’ve stopped learning my languages, and I was lucky to be able to make use of my Spanish language skills fairly soon after graduating. I moved to Pamplona in 2007 and worked there for a year teaching EFL. My French to some extent, and certainly my German, have fallen a bit behind and I think I know why. The language I have lived more is Spanish. Living and working in Spain has meant that I have had to use the language and also I have had to learn new things about the language (more conversational, more idioms, more vocab.) and I’ve been able to do that in a native speaker environment. I also had an Argentinean girlfriend which helped motivate me! If you’re not sure about that, check out Ken Wilson’s comment at the end of this video by Lindsay Clandfield:

So there you have it. My tips for language learning are:
be motivated or find an environment that motivates you
living the language is key – if you have to use the language in your day-to-day life it will become part of you 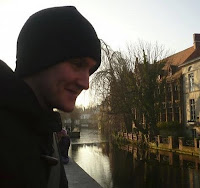 Mike Harrison is an ESOL teacher in London, in the UK. In his spare time he tries not to fall over while doing capoeira. He is on Twitter at http://twitter.com/harrisonmike and blogs at http://mikeharrison.edublogs.org

Posted by little_miss_bossy at 3:59 PM