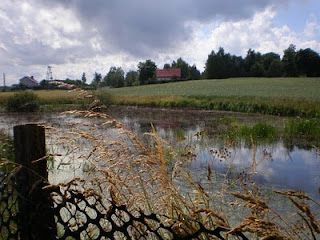 This is going to be an interesting post for two reasons:
a)      most of you have never heard of Kashubian
b)      I myself don’t remember learning the language so it kind of doesn't fit into the series
And here is my story:
Until recently, Kashubian has been considered a dialect of Polish, spoken in the north of the country in a region called . A few years ago it has been granted the status of an official regional language and nowadays students can learn it at school. There are many sites dedicated to spreading Kashubian culture, language and traditions. You can even listen to Radio Kaszebe.
Years ago, on the other hand, the situation was totally different. My parents’ generation was picked on and punished for speaking Kashubian at school. They spoke Kashubian at home but never learned to read or write in it. Obviously they know Polish as well so I guess they might be called bilingual.
I grew up in a village (crucial factor - that’s where the language is usually spoken) and all the people in my family know Kashubian. I always thought it’s almost the same as Polish but apparently speakers of Polish, who don’t know it, can’t understand it at all.
My parents talk to each other, their siblings and parents in this very language. Yet they never spoke it to me. Even when my grandma asked me questions in Kashubian I always answered in Polish and nobody saw anything strange in it. As a result, me and my cousins i.e. the younger generation fully understand Kashubian but can’t speak it.
By ‘can’t speak it’ I mean produce extended stretches of utterance without hesitation causing strain. To be honest, any real ‘Kaszeba’ will immediately figure out that I’m not a ‘native’.
Who am I then?
Can I consider myself bilingual?
I always thought of myself as a weirdo but maybe that’s what happens to children brought up in bilingual families?
What do you think? Have you had similar experiences?
As always, I'd love to hear your stories :)
Posted by little_miss_bossy at 7:27 PM